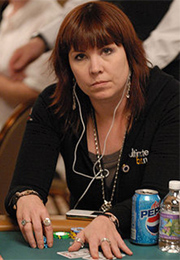 Annie Duke had been born in Concord in New Hampshire in 1965. Her entire family played cards with a competitive spirit and her brother Howard Lederer is in fact a famous professional poker player. After college Annie got married and started playing poker in Colorado to help pay the mortage.

Annie’s brother coached her and helped her sharpen her skills. He even loaned her money to play at the tables and soon things began to change for Annie. In 1994 Annie entered the World Series of Poker when her brother urged her. Annie did quite well in her first tournament at the WSOP. She took the 13th place and in fact, performed better than her brother at the game. In a few months time, Annie made over $70,000 which encouraged her husband and her to move to Las Vegas to pursue a professional career.

Throughout her career, Annie had been consistent with her winnings at the table. During her career, Annie’s wins have been recorded in at least 40 different cash games. Annie participated in the WSOP again in 1996 and stood second in the Limit seven card stud game winning a total of $72,000 in winnings.

Interesting Fact: Annie Duke has also been a coach to Ben Affleck who, under her guidance won the State championship in California.

During the final stage of the tournament, Annie went heads up against Phil Hellmuth and defeated him to win $2 million at the tournament. That was the highest ever win recorded earned by a female in one event at that time.