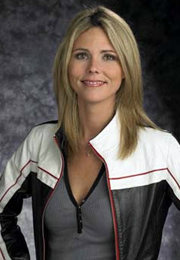 Clonie Gowen has been playing poker professionally for a short time. Born in Dallas, Texas, Clonie took several gambling weekend trips to Louisiana to learn poker. She played blackjack at first but then was hooked by poker. When she began playing professionally in various tournaments, she immediately rose to fame due to her skills at the game. She is now a very well known name in the poker circuit.

Clonie only began playing tournaments in 2002 and has managed to build up a very impressive track record. She finished in the money at the World Poker Tour in Costa Rica and earned herself a spot at the popular Ladies Night event where she competed against some of the best known players in the industry. Since her strong performance in 2003, Clonie has been regularly seen at various poker tournaments and also on online rooms.

Clonie has twice won the first place on Poker After Dark on NBC, where she won $120,000 in each event. She also won $438,000 and the first place at the Bellagio Cup Event. Clonie has finished in the money at the World Series of Poker four times in 2008.

Apart from playing poker, Clonie Gowen has also been a poker commentator for the Dublin World Poker Championship. She had also once hosted the Ultimate Poker Challenge. Clonie is also an active charity hostess, hosting various charity poker tournaments and events to help amateur players learn skills to master the game and the tournaments.

Interesting fact: Clonie Gowen’s real name is Cyclona Gowen, the name was given to her by her parents because she was born in the middle of a cyclone.

Clonie Gowen is also a member of the prestigious United States Poker Association Board of Directors. She writes regularly for the All In Magazine and has her own column. The magazine is known to be the leading poker magazines in the world today.

Clonie is a mother to two children and has been living in Sachse, Texas. It is illegal to play poker in the area and one has to drive down to Oklahoma which takes four and a half hours to play any casino games. Due to this, Clonie has mainly been playing poker online now from home. Clonie Gowen has been signed to be a member of the Full Tilt team, for which she normally plays now.