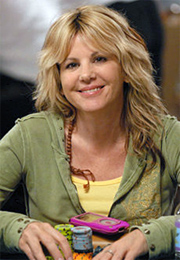 As of now, her total earning from poker tournaments is around $1 million. Cyndy Violette has been divorced twice and is mother to one daughter. Cyndy had only been a part time poker player till 1993, and had not played regularly during her first marriage. When she married the second time, she had shifted to Washington and had mainly been playing only for a few tournaments in Las Vegas due to her domestic responsibilities.

Cyndy's favorite game is the seven card stud, unlike many players. Most of her top finishes have been in the seven card stud tournaments, although she has also been successful in Texas Hold'em events. Cyndy has been in the poker industry for quite a long time and has mostly been known as a stud player. Her fame and her poker skills only began to be noticed after she won a bracelet at the 2002 World Series of Poker tournament.

Cyndy Violette is also a member of the prestigious Doyle's Room, which is the online poker room owned by Doyle Brunson. She has had an outstanding track record when it comes to the World Series of Poker tournaments; she has finished in the money in 27 different events at the WSOP.

Cyndy Violette has been given the nickname of "Ultra" by her opponents and she still continues to play in various online tournaments as well as some big tournaments organized in the country.