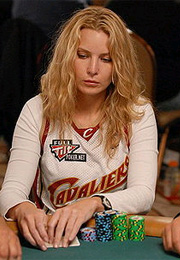 Erica Schoenberg was born on March 25, 1978 in Ohio and is a professional poker and blackjack player. Apart from being a professional player, she is a former fitness trainer, volleyball player and a model. She received training from one of the members of the prestigious MIT Blackjack Team which is known world wide for their amazing skills at the game. She rose to fame mainly due to her performance at the World Series of Blackjack and World Series of Poker.

At the Mandalay Bay Poker Championship which was held in 2007 Erica won the No Limit Texas Hold'em game in the $2,500 category. For winning the title, Erica won more than $105,000 in prize money. Another good performance for Erica was when she finished in the 16th position at the $25,000 Hold'em No limit game at the World Poker Tour. Erica has also made an appearance on the World Poker Tour ladies night tournament in season 4 which was a televised event.

Through her career as a professional player, Erica Schoenberg has an overall earning of more than $600,000 from tournaments alone. Erica is also a known name in blackjack. She participated in the World Series of Blackjack and also in the Ultimate Blackjack Tour.

Erica also participated in the World Series of Blackjack in season 2 and season 3. In the first phase of the tournament, Erica was the runner-up and was eventually eliminated from both the tournaments in the wildcard round.

The Ultimate Blackjack Tour in which Erica Schoenberg competed was an event spread out over ten weeks and was televised on CBS over two seasons. During the first season of the show, Erica came in the second position in the seventh round. Dave Stann had won the first place in that round. Erica had also competed in the Ladies Night tournament which was also televised on CBS.

Erica Schoenberg is now a full time professional poker player and she treats it like a normal job. On normal days Erica tries to limit her playing to eight hours per day, except when she is playing in tournaments. Erica is engaged to fellow professional player David Benyamine and likes to spend her free time playing volleyball and watching basketball.