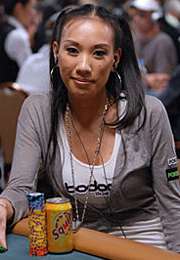 Evelyn Ng was a blackjack dealer but her real fame began when she was invited in 2005 to the World Poker Ladies Tour competition. Evelyn finished second in the tournament even though she was relatively unknown and was considered an underdog. Evelyn defeated several well known poker players in the tournament like Kathy Leibart, Jennifer Harmen and Annie duke.

Evelyn still continues to play in various tournaments and cash games. Before she began her career in the tournaments, Evelyn had played cash games for ten years. She had first begun her career as a dealer in Toronto, Canada. Evelyn had learnt many tricks of the trade from her dealer days by observing the other players.

Evelyn had first started getting interested in the game when she was eighteen and was working as a dealer. She began playing in various cash games at many Texas Hold’em venues. Until she got invited to the World Poker Tournament in 2005 at the Ladies Event, Evelyn had exclusively played in cash games. Even though her performance post the WPT event hasn’t been impressive, she is still considered to be a tough competition and a serious poker player.

Since Evelyn first rose to fame, she has made appearances in several television shows related to casino games and poker. Evelyn had also appeared once on the Criss Angel’s Mindfreak program. Evelyn had appeared as a professional poker player and Criss had tried to use his abilities to make her pick the losing hand.

On the show Criss Angel had won all the hands that he played against Evelyn. Due to the popularity of the show, Evelyn had got quite a lot of promotional value herself. She had also appeared on several other television shows like King of Vegas, Spike TV series and Casino Casino on the UK television. King of Vegas is a television show where the participants have to compete in four casino games including blackjack and poker.

Evelyn is now a member of the Bodog team.