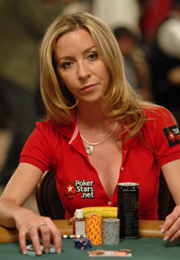 Isabelle Mercier is a professional poker player who represents the PokerStars team. Due to her incredible performance during her career, Isabelle has earned herself the nickname of "Isabelle No Mercy Mercier".

Isabelle has a law degree from the Montreal University where she was a blackjack dealer at the Casino De Montreal. Her connection with the game began when she took up a job as a poker room manager at one of the oldest venues in Canada, Aviation Poker. At that time, Isabelle was still learning the game and the skills. Her first win was in 2002 at Amsterdam, Holland and it was then that she rose to fame.

One of the most famous events in the poker industry is the well known Ladies Night Event organized by the World Poker tournament. During this event, the top women players in the industry come face to face and compete. In the Ladies Night event of 2004, Isabelle won the first position and beat some respected names at the final table like Wendeen Eolis and Cyndy Violette.

Isabelle Mercier has won several tournaments since then. Although, she only began playing professionally in 2002 she still has earned herself a spot amongst the best professional players in the industry. In her first win at the Amsterdam tournament, Isabelle had won a total of $53,500 as prize money. Next, in 2004 she won $25,000 at the WPT Ladies night tournament.

In 2004, Isabelle again competed in the No Limit Texas Hold'em MCOP Amsterdam tournament and won the 5th place. In 2005, she competed in the Monte Carlo European Poker Tour and won the 10th Place. In 2006, Isabelle won the 7th place at the European Poker Tour at Deuville. In all, her earnings from tournament wins through her career have been close to $700,000.

Isabelle Mercier's autobiography was published in 2008 in France as well as Montreal and was titled Profession: Bluffer. The book has been published in both English and French and the French publishing firm, Flammarion had published it in both languages.

Isabelle Mercier now lives in Quebec in Victoriaville. She admires and respects Daniel Negreanu and Phil Ivey in the industry. Outside of Poker, Isabelle's favorite people are Pierre Morency, who is a well known French poet and writer and Paulo Coelho, who is the author to many famous spiritual books and a songwriter.

Isabelle Mercier says that she had first learnt the game from her family and strives to win as many big tournaments as possible. She believes that women players are not respected in the poker circuit these days.