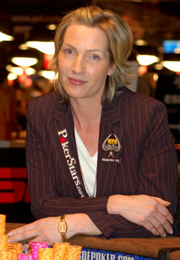 Katja Thater is a very well known poker player in Germany. Katja is also married to a professional player, Jon Von Halle. Katja Thater also breeds horses for competitions when she is not playing poker. Most tournaments that Katja competes in are covered by the German television channels, which have gained her a lot of publicity and popularity as a professional player in Germany.

Katja Thater mainly rose to fame due to her involvement in the Poker Nations Cup. The event is a European poker event which involves several teams of six members from different European countries. The event is mainly designed to make it equivalent to world cup in poker. The Poker Nations Cup has only taken place thrice till now, in 2006, 2007 and 2008. Katja had been a member of the team representing Germany in the Preliminary Match 3. In this leg of the tournament Katja had won the second place for Germany.

Katja Thater's appearance on the Poker Nations Cup had gained her much publicity in Europe. Apart from that tournament, she had also participated in the Women's Poker Open. Her biggest accomplishment had been at the World Series of Poker in 2007. Katja had participated in the $1500 Razz competition. The game itself is considered to be quite tough and very frustrating to play. The game requires players to make the worst hand possible for winning.

Her first known tournament had been in 1999 when she had participated in a seven card stud tournament in Osterreich. During her career as a professional poker player, Katja Thater has won more than $300,000 from just the tournaments.

Unfortanely, Katja has been called by quite a lot of unpleasant and notorious nicknames by her fellow players and tournament opponents. She is known on the poker circuit as "Lady Horror" and "Miss Slick". Currently, Katja is a member of the famous PokerStars Team.

Apart from playing poker, Katja Thater was a dressage competitor, which is a horse show event and bred horses for the games. Although she has many other interests and careers apart from poker, she continues to play in tournaments along with her other obligations. Katja Thater intends to go ahead with her poker career and win many more prestigious events.