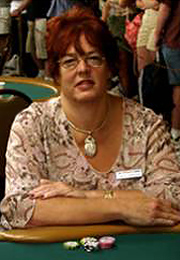 Linda Johnson has had fifteen years of experience as a professional poker player. She has won a bracelet at the World Series of Poker and has founded the Tournament Directors Association. She has also been a publisher for the CardPlayer magazine and a chairperson at the Poker Players Alliance. Linda has several accolades under her belt, and these were just a few from the list.

After Linda came of age, she learnt poker on her own through books. She started playing the game and very soon became better than most others and had the knack of winning at any table. She started with the home games and the post office’s local games where she kept winning every game.

Ever since the tournament, Las Vegas became Linda’s permanent home. For the next fifteen years, Linda kept playing at all the high stake games and participated in the tournament and was consistent in her winnings. During her entire career, Linda has never gone broke even once and has just had a few short term losses.

In 1993, while vacationing on a CardPlayer cruise Linda learnt that the magazine were planning to sell, which is when she partnered with Scott Rogers and Denny Axel who were her fellow professional players and bought the magazine. Linda considered the magazine as a way of promoting poker and casting it in a positive light.

For years Linda had been treated poorly in casinos and card rooms for being a woman and she became an opponent of abuse of players and wanted to be an ambassador to set up standards at the various tournaments of poker. Promoting poker became a central part of Linda’s life.

Linda also founded the Tournament Directors Association which is an NGO created for the purpose of setting up standards for the industry during the events. She also helped to set up several conferences for the business related details apart from her duties as a publisher.

In 2000, Linda stepped down from her publishing job when the partners decided to sell the magazine to Barry Shulman. Linda still continues to write a column for CardPlayer and she now operates and owns the CardPlayer cruises that she had acquired with partners.

Linda continues to play poker, however, not as much as she used to once. She still plays a lot of online poker games and in various small poker tournaments.