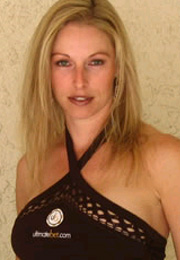 Monica Reeves was born in Oakville, Ontario in 1972 and is a well known professional blackjack and poker player. Monica was a former model who began her career in 2005 under the guidance of Jim Worth. Monica started playing professionally after nine month of training. She has played and won in several tournaments.

Monica does not consider herself a professional player. She believes that a gambler is one who plays chance games like roulette or craps. In games like blackjack and poker there are many other factors involved other than luck. It requires skills. Monica does not believe that being a woman has any disadvantages or advantages in the game.

Monica admits that she does use her charms in a game if she believes it would help her win. Men sometimes don’t play hard against women so as to keep them in the game. She is a mother of two children and finds it hard when she has to be away from her children in order to participate in a tournament or an event.

Interesting Fact: Monica Reeves also has a Dental Hygienist license that she earned in 1994 from a college in Syracuse, New York.

After her success on the Ultimate Blackjack Tour show on CBS, her winning enabled her to quit her job and she now practices and concentrates harder on her career as a professional poker and blackjack player. Monica’s total winnings from live tournaments in 2008 were approximately $40,000.