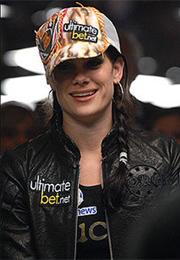 Tiffany Michelle was raised in Los Angeles and had affection for card games since childhood. In 2005 she started playing poker with some of her friends from Hollywood. After playing in various cash games for a year she started taking the game quite seriously.

Tiffany competed in her first ever tournament at the Harrah’s Casino in Las Vegas, on the BombshellPoker Team. She later signed up with Bluff Radio in 2006 and provided coverage for the World Series of Poker on radio. She also became the main host for PokerNews.com and covered several events like the European Poker Tour Grand Final, World Series of Poker and World Poker tour.

Tiffany continued to participate in online poker games, in several tournaments and at Las Vegas casinos. Tiffany made an appearance at the World Series of Blackjack on GSN during the fourth season. Tiffany’s real fame began in 2008 when she entered the World Series of Poker. She entered the main event of the $10,000 No Limit Hold’em. There were a total of 6844 players in the event and on the seventh day Tiffany was still standing strong with the third place in the chips and there were only 27 other competitors remaining.

Tiffany was the last woman still left in the tournament and many believed that she would be the first woman to win the main event. However, Tiffany was out of the event and won herself the 17th place as well as $334,534 and quite a lot of fame.

Tiffany had also participated in the World Series of Poker where she was the subject of quite a lot of criticism and controversy. She participated in the main event of the tournament and her buy in was sponsored by PokerStars. However, during the event her clothing had displayed the logos of both PokerNews as well as UltimateBet.com. She was later accused of selling out and failing to represent PokerNews. The matter is still under consideration and is not yet solved.

Interesting Fact: Tiffany Michelle is also a well known actor; she has appeared in the award winning movie Carrie’s choice where she had the main role. She has also appeared on various shows like ER, American Dreams and Semi-pro.

Despite of all the controversy and criticism, Tiffany’s place in the poker industry has definitely got stronger from her participation in the World Series of Poker. This would definitely bring her a lot of new opportunities. Tiffany has now decided to play poker full time. She still plays online on UltimateBet.com. Tiffany enjoys playing stud and Chinese Poker. Tiffany also writes and sings in her free time.

Tiffany has had a lot of experience in front of the camera; this along with her new celebrity status makes her the perfect ambassador for professional women players.