Although the world of casino gaming has always been a rather male-dominated one, it’s no longer the case, especially now that more and more people play online today. 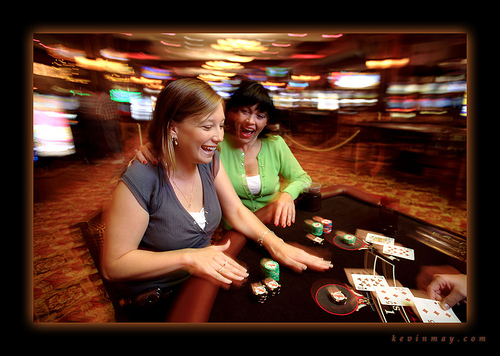 Perhaps the increased number of women who play online has come about because it’s more convenient to play casino in your own home rather than need to go to the casino. However, in today’s society, most women would be as comfortable walking into a land-based casino and taking a place at a blackjack table as a man would. The casino is no longer such a man’s world.

There is a theory, of course, that women are better blackjack players than men. Though it’s impossible to generalise there are some pretty convincing arguments as to why certain female characteristics could make women better card players than men.

As with most things in life, women and men take different approaches. In general, women are more willing to sit down and understand the rules to a game before starting to put real money down. Men, on the other hand, are more impatient and eager to get playing with real money – so tend to lose quite a bit when they don’t know the rules.

There are plenty of places where you can practice your blackjack playing skills in demo mode, where the bets you make are with a virtual, valueless pile of coins. For instance you can play 32red blackjack online in demo mode as often as you want, and this allows you to develop an understanding of the different moves – like splitting, doubling down and taking insurance. Once you have built up an understanding of the game, you can then trial your knowledge with real money using the welcome bonus credit that most casino sites offer.

It’s also been said that women’s ability to multi-task will give them an upper hand when it comes to card games. When you play a game like blackjack, there are a number of different thought processes and actions going on at once, and maybe women handle that better than men. It’s a possibility. Also, it may be that men allow their egos to take control and respond to losses by playing for higher stakes, rather than admitting when it’s time to quit. Women tend to have a better control of their ego and would be more willing to admit defeat rather than throw more money into a losing streak.

There are plenty of famous women blackjack players around at the moment. For a start, there’s Erica Schoenberg, nicknamed the Blackjack Babe (and Poker Babe, come to think of it). She’s a regular player at the World Series of Blackjack events and has also played in the Ultimate Blackjack Tour. Originally a model and a basketball player, she was trained to play blackjack by one of the MIT Blackjack Team and never looked back.

Another successful female blackjack player is Monica Reeves, who is also a former model. Reeves doesn’t put down any of her success at the blackjack table to being female, although she has said she occasionally turns on the charm at the card tables and has used it to her advantage!