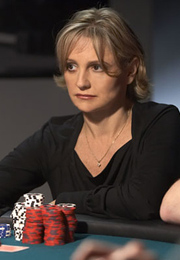 Jennifer Harman has been a two time bracelet winner at the World Series of Poker tournaments. She is the only woman to have won two bracelets at the prestigious tournament. However, Jennifer is mostly known for her skills at the cash games rather than as a tournament player.

Jennifer Harman first began playing at the tournaments in the 1990s. In 1995, she finished in the 6th place at the World Series of Poker and won two different tournaments at the Commerce Casino and Orleans Open. Her first big win was at the 2000 World Series of Poker where she won the first position and her first bracelet. Her win put her into the limelight in the poker industry.

In all, Jennifer Harman has finished in the money a total of 22 times at the WSOP events. She has been at the final table twice at the World Poker Tour and eleven times on the WPT. Overall, Jennifer's earnings through poker tournaments have been over $2.2 million during her career. She has been known to be a specialist for the cash games.

Jennifer Harman has also appeared on several different shows and represented various poker teams through her career. She appeared on the Poker After Dark on NBC and on the High Stakes Poker on GSN. She has also participated in the World Series of Poker in Europe. Jennifer has been a member of Full Tilt team and she has been recognized as an important player in the poker community.

Jennifer had entered in the Deuce to 7 lowball event at the WSOP event in 2000. She had never played the game before and she just took a short lesson from Howard Lederer before she entered the tournament. Jennifer still managed to reach the final table at the tournament and defeated several seasoned players Steve Zolotow and Lyle Berman.

Jennifer Harman won one of the biggest pots in the 2002 WSOP tournament. In 2002 Jennifer had participated in the Limit Holdem tournament and had defeated players like Humberto Brenes, Mimi Tran and Allen Cunningham to win the bracelet.

In the year 2004, Jennifer Harman quit as a professional poker player after undergoing a kidney transplant surgery for the second time. Jennifer has also started an organ donation foundation after retiring from poker which is known as Creating Organ Donation Awareness. The organization creates awareness and raises money for organ donations.