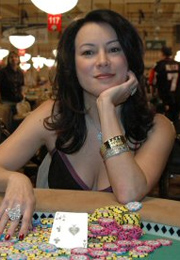 There are quite a lot of celebrities that play poker, including Pamela Anderson, but none have been so famous for winning any major tournament as Jennifer Tilly. Jennifer Tilly is not one of the celebrities who plays poker and other casino games but has also proven her skills at various tournaments.

She is an Oscar nominated actress and the winner of many other awards during her acting career. Apart from her acting skills, Jennifer Tilly is also famous for her impressive poker skills. Her poker abilities first came into limelight when she won the prestigious bracelet at the World Series of Poker event.

Jennifer was born in Los Angeles and was one of the second of the four children in her family. Her sister is also a well known actress, Meg Tilly. Jennifer's father, Harry Chan was a used car salesman and a Chinese American. Jennifer's mother, Patricia Tilly was a school teacher and an actress herself.

Jennifer had participated in several different poker tournaments before her big win at the WSOP, but was generally assumed as just a celebrity trying to learn the game. However, people's opinion soon changed when Jennifer won the bracelet in June, 2005. Jennifer Tilly had competed in the No Limit Hold'em Ladies special event and had won the first place and $158,625 as the tournament prize money. In all, Jennifer had defeated more than 600 players in the tournament.

Jennifer had competed in the World Poker Tour in 2008 in the Texas Hold'em event and won the 12th place and $61,600. In all, through her career as a poker player, she has managed to earn an impressive $450,000 from tournaments alone.

Jennifer Tilly is regularly seen at the bigger poker events and is respected for her amazing skills at the game. At the moment, her acting career has been taken over by poker and she is dating a professional poker player Phil Laak. Her opponents in the tournament often refer to her as "The Unabombshell" due to her relationship with Phil "Unabomber".